Antonian offers three ways in which families may offset the cost of attending Antonian:

This is a scholarship opportunity for two graduating seniors. This scholarship was established in memory of Jesus F. Ramirez, an ACP parent, and faculty member.
Please read thoroughly through the requirements and should you have any questions please reach out to Mrs. Anna Marie Ramirez at annarmrz467@gmail.com. 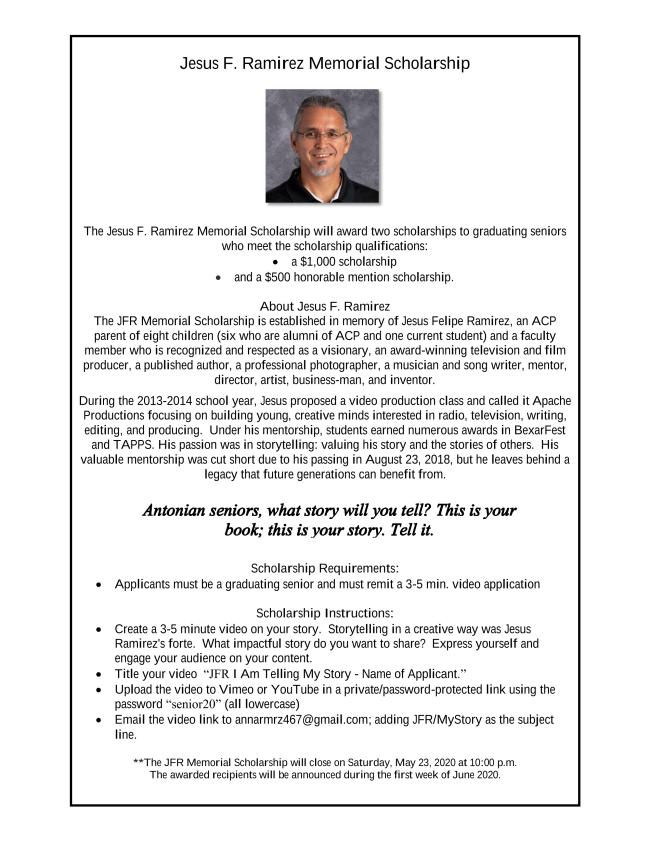 Through the generosity of Antonian Alumni and Friends, the Antonian Wild Game Scholarship Dinner is pleased to award scholarships to students with financial need and who meet the parameters set forth below. With Apache pride in our hearts, we hope that the recipients of these scholarships will be future ambassadors for Antonian, not only with their friends and family but in their community. Upon graduation and as Antonian alumni, they will become active members of the Antonian Alumni Association and foster the spirit of giving back through their gifts of time, energy, and resources.

The Antonian Wild Game Scholarship Dinner organization will award eight scholarships at a minimum of $3,000* per school year.

To apply, the student must provide a brief (1-2 page, DS) essay describing their qualifications and their motivation to attend Antonian. Applicants should describe their dreams for the future and how Antonian can help to make a difference, not only in the student’s life but the lives of others. In this application process, it is the student’s responsibility to demonstrate that the scholarship criteria are met.

Criteria for the Antonian Wild Game Scholarship are:

* At the discretion of the Antonian Alumni Association, the award amounts will be reviewed and adjusted for any given year prior to that year’s application process. *


Albert (Al) Joseph Lilly was born in 1918 in an Irish neighborhood in the Bronx NY and attended Catholic schools in New York City. His family had immigrated to the city and eventually built the largest meatpacking company in New York.


Ever the adventurer Al, as a young man in 1940, took off with a friend, Billy Benedetti, to Africa to shoot photos for World Book Encyclopedia. In 1941 they were still in Africa when Pearl Harbor was attacked. Not wanting to miss out on the fight, Lts Lilly and Benedetti joined with the British Army in North Africa as American Volunteers. As such, they were one of the first Americans to fight the Nazis in WWII. Tragically, Billy was killed, and his death, which was witnessed by Al, convinced him to dedicate his life to service. He returned home where he met his wife of over 50 years, Rose Mugavero, and together they had 5 children including Kevin (Antonian '78)


His subsequent military career included Korea, service under President Eisenhower as head of Air Force Security, and then head of US Security Forces in Vietnam. At the conclusion of his long Military Career, Al came to Antonian to teach history, then later to serve as Dean of Boys. He stayed on until taking the position as Chief of Police for Universal City Texas in 1976, where he served until just before his death in 1996.

Al was an avid reader, historian, and die-hard Dallas Cowboy and New York Yankee fan, switching to the Houston Astros in his later years.

This merit-based award is a one-time $1,000 scholarship given to a junior student and applied to their senior year (12th grade) at Antonian College Preparatory High School. The award also includes a plaque and will be presented during a school-wide assembly.

Any current junior may apply. Candidates will be evaluated according to their leadership skills, community involvement, extracurricular activities, and affiliation with law enforcement and/or the military. Although academic achievement is not a qualifier for this award, the candidate should demonstrate both aspirations to be successful and a strong, well-rounded character.

The applicant should submit a cover letter with his/her name, parent(s) names, full address, telephone and email and a 500 word (minimum) essay. In this essay the applicant should describe the involvement of any family member either in law enforcement or military service and clearly demonstrate why they are the best candidate for this award.


As supporting documents, the applicant shall provide the following:

DLG Luce Salazar PLLC, a Texas-based law firm, holds core those values of a traditional law firm, including building personal relationships with each of their clients. Their principal office is in San Antonio, Texas with additional offices in downtown Austin, Texas and The Woodlands, Texas (Houston Area). Accessibility is a core value that the DLG/Luce/Salazar partners share and believe is a key to their success.

Eligible candidates will be in the top 25% of the national High School Placement Test (HSPT) scores and have a demonstrated financial need.  Financial need is a criterion for this scholarship.  The student must have a completed FACTS application on file to be considered for this scholarship. Student records must be clear of disciplinary actions. The student must demonstrate leadership or stand-out performance in middle school activities. These may or may not be related to academics.

To apply, the student must provide a brief (1 – 2 pages, DS) essay describing their qualifications, their motivation to attend Antonian and how they feel Antonian will make a difference in their life. Please provide a cover page with student name, parent name(s), address, contact information (email and phone) and prior school.

Application packets will be accepted from May 1st - May 31st, and must be postmarked or delivered to:

Applications will be accepted until May 31st of the current school year. The recipient of the award will be notified by June 20th.

The Antonian Hall of Fame Scholarship

The Antonian Athletic Hall of Fame, established in 2012, recognizes individuals who have made exceptional contributions to the prestige of Antonian both on and off the field of competition. Inductees have brought much distinction and honor to Antonian and have established a tradition of excellence which is incomparable. Their achievements and contributions have touched everyone associated with Antonian College Preparatory High School. From the inception of interscholastic athletics at Antonian to the present, none have better exemplified the true spirit of athletic competition at Antonian than these honored players, coaches, administrators, and families.

In keeping with the tradition of Apache pride and spirit, the Antonian Athletic Hall of Fame Scholarship will award two $1,500 scholarships, one each to a male and female student, for their senior school year tuition at Antonian.  Recipients must meet the following criteria:

To apply, the student must provide a brief (1 – 2 page, DS) essay describing their qualifications. The student will explain their motivation to attend Antonian and how they feel extracurricular activities have helped them grow in their faith, leadership, character, and personal integrity.  The student must describe how their experiences at Antonian have helped them move toward college and future success.  Please provide a cover page with student name, parent name(s), address, and contact information.

The deadline to submit essays is Friday, July 31, 2020.   Essays may be emailed, mailed or delivered to:

Email address is: mpapich@antonian.org. No late applications will be accepted.

A formal announcement and presentation will occur at the Hall of Fame Dinner during the fall semester.

Charles James Kittell was born on February 20, 1928, in San Diego, California and spent his childhood growing up in Lewistown and Missoula, Montana. He graduated from Missoula County High School in 1946. After being named a high school All-American in track & field in 1945, he was invited to the Olympic Trials where he qualified as the alternate for the 1948 London Olympic Games as a member of the track & field team. He received his Bachelor's Degree from the University of Notre Dame in 1951. Upon graduation, he served in the United States Air Force during the Korean War. During his eight years as principal at Antonian, the school underwent major changes including the transition to co-ed and a student population that tripled. He was also proud of establishing a stringent academic program which was able to produce National Merit Scholars. While educating the future of America, Jim continued to serve in the Air Force Reserves. During his reserve status, he was stationed at Wilford Hall Medical Center and in 1987, he was selected as the nation's most outstanding Medical Service Corp (MSC). The following year he was promoted to Colonel at which rank he retired in 1988, after having served 37 years. His commitment to education and country earned him numerous medals and countless awards for his outstanding efforts and contributions. On February 17, 2015, Charles James Kittell went to be with our Lord at the age of 86.